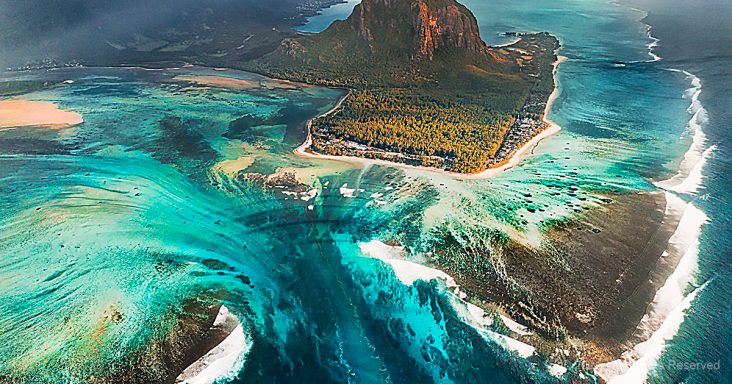 A perfect set of circumstances created this underwater waterfall illusion off the coast of Mauritius island in the Indian Ocean. Each year, thousands of tourists are fooled.

Sometimes, the perfect natural conditions come together to have us seeing and experiencing things that are not as they seem. Mother Nature sometimes likes to play tricks on us, and nowhere is that more evident than on Mauritius Island in the Indian Ocean.

Mauritius itself isn’t a popular tourist spot like we might imagine. It isn’t most people’s first vacation choice, but the village of Le Morne is still a popular enough tourist destination. After its time as a stopover port in the 1800s, it gained some notoriety.

No… This is not fake. This a bizarre natural phenomenon. Behold the “Underwater Waterfall” of Mauritius off the coast of Le Morne Brabant! pic.twitter.com/BE1BTEDmN1

But it’s neither the village itself or the nearby UNESCO World Heritage Site that Mauritius island houses that generates the most interest. It’s what lies in the water right off the coast of Le Morne that has tourists fooled.

From the air, it looks like there’s a waterfall resting just beneath the surface of the clear sapphire waters. The composition is perfect, as though nature herself painted it – and in some ways, she did.

In reality, the illusion is formed by the sand and silt on the seafloor being manipulated by strong currents between the opening in the reef. The deposits are run off in such a way that it makes it look like they are descending into darkness. It’s breathtaking and terrifying to witness!