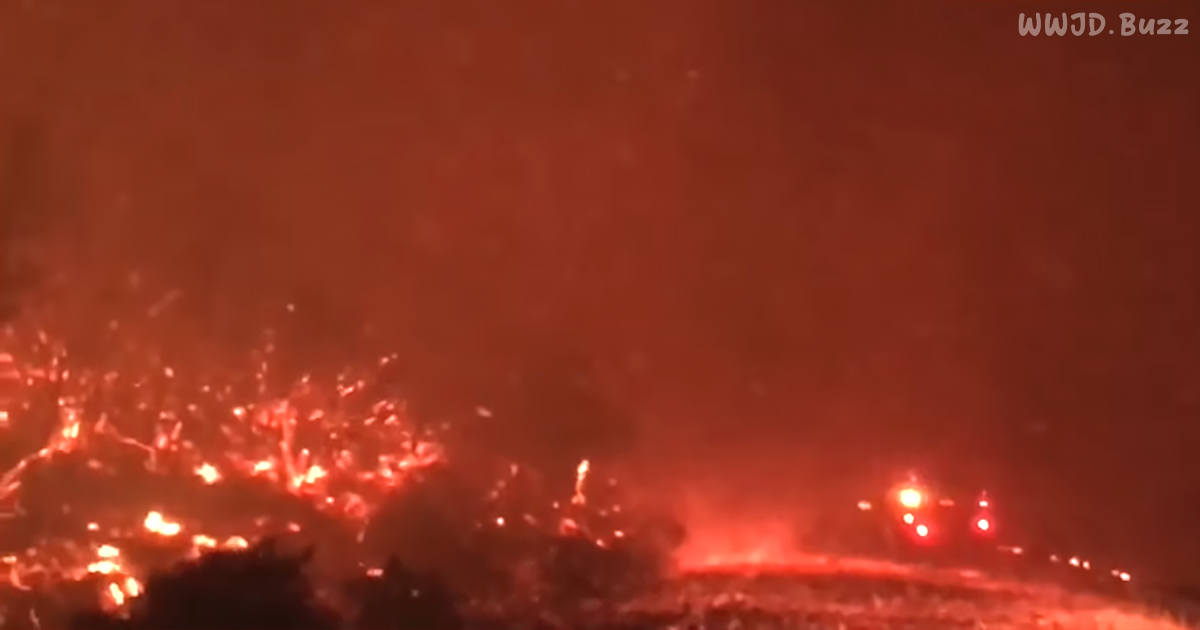 Fire tornadoes are real — we have video proof from multiple angles.

A report issued by California Department of Forestry and Fire Protection describes the fiery inferno: The smoke-and-fire tornado was about 1,000 feet wide at the base and it reached 7.5 miles into the sky; speeds of up to 165 mph, with lethal temperatures over 700 degrees Fahrenheit.

“Observations from witnesses and other evidence suggest that either several fire tornados occurred at different locations and times, or one fire tornado formed and then periodically weakened and strengthened causing several separate damage areas,” the report states.

Extraordinary footage of a massive fire tornado in the #CarrFire back in July, released by Cal Fire yesterday. More photos from the California #wildfires here https://t.co/nCyve6FY5S Jo pic.twitter.com/IGzntIlQFR

Crazy fire in lake elsinore about 10min from us. I caught a huge fire tornado, biggest I've ever seen! The fire is raging. #abc7eyewitness pic.twitter.com/E5nPZLlP6m

TIME reports:
The rare, apocalyptic fire tornado that ravaged a Northern California neighborhood last month trapped and killed a firefighter while “violently” flinging debris and embers at two bulldozer operators, according to new details released on the stunning fire event.

The fire tornado — which was about 1,000 feet in diameter with winds as fast as 165 miles per hour — was responsible for the death of 37-year-old Redding, Calif., fire inspector Jeremy Stoke, according to a report from California’s Department of Forestry and Fire Protection (Cal Fire) released this week. It detailed what happened during and after the unusual fire tornado that tore through Shasta County, Calif., in the early days of the destructive Carr fire, which sparked July 23 and is still burning.

Before his death, Stoke was driving down one of the only roads used to evacuate the area to check on the homes and residents threatened by the fast-moving fire when it drew near. He radioed “mayday” to the Redding Fire Department, saying he needed a helicopter to drop water on the area he was in. Then the fire tornado overtook him, the report says.

The loss of human life is tragic. Many wonder whether it was avoidable, but the unpredictable nature of firestorms like leaves more questions than answers for now. One thing is for certain, the survivors have a lot of rebuilding ahead — for those who dare.

The damage: A staggering 1,077 homes, 22 commercial buildings, and 500 other structures have been destroyed by this blaze so far, according to Cal Fire. The speed of the fire’s advance and its devastating winds helped turn it into such a deadly event, overtaking a woman and her two great-grandchildren, as well as a firefighter as it advanced into Redding. A total of 8 people have died as a result of the Carr Fire, which was 55% contained as of Saturday. Source: AXIOS

The tornado exploded in the middle of what was already a gigantic, devastating wildfire that started on July 23 with a spark from a vehicle driving on a flat tire. Stoke is one of eight people killed since the blaze started and destroyed nearly 1,100 homes. It was 76 percent contained as of Thursday.

A 17-year veteran of the fire department, Stoke was familiar with the dangers of wildfires. But this was unprecedented.

The 37-year-old fire inspector was driving his pickup truck down a Redding road, working on evacuating people from the larger blaze, when he radioed out a “mayday” call, according to the report.

Stoke said he “needed a water drop and was getting burned over,” the report said.

An engine captain who heard the call asked for Stoke’s location. There was no response.