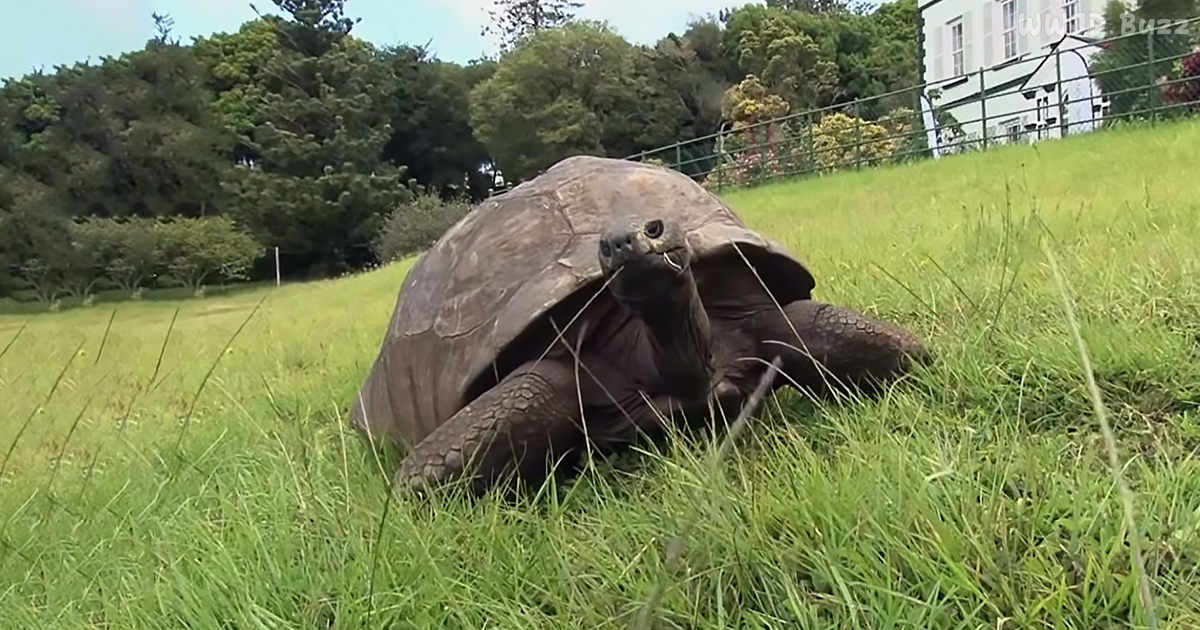 He was born before the lightbulb was invented.

Jonathan the giant tortoise is the world’s oldest land animal, living in pampered luxury on the remote British island of St. Helena.

It isn’t unusual for tortoises to live to be 100 years old. In fact, tortoises generally have one of the longest lifespans in the animal kingdom. Some have been known to live for more than 150 years.

So even in the tortoise kingdom, though, Jonathan is a record breaker. The Seychelles giant tortoise is celebrating a very special birthday in 2019. At 187-years-old, he is the oldest living animal currently known to man!  As if that record isn’t enough, Jonathan is just one year away from the title of the oldest tortoise in history as well.

Two giant tortoises photographed in the grounds of Government House, St. Helena. The tortoise on the left is ‘Jonathan’, estimated to have hatched in 1832 and is alive and well today.

Although Jonathan came from somewhere around the Seychelles in the Indian Ocean, he’s lived on the remote island of St. Helena in the South Atlantic since 1882. He was already fifty-years-old when he made his way to St. Helena as a gift to the governor of the Overseas British territory at the time. Ever since then, he’s lived at the governor’s home there, simply called the “Plantation.”

Just think of all the historical events and scientific discoveries that Jonathan has lived through since his birth in 1832. He’s lived through two world wars, the Russian Revolution, seven monarchs on the British throne, and thirty-nine U.S. presidents.

The first incandescent light bulb was invented in 1878, and Jonathan was over seventy-years-old when the first powered flight took place. The germ theory wasn’t introduced to the scientific community until 1861 by Louis Pasteur.  Even the periodic table wasn’t put together yet.

Sadly, there are no cute baby pictures of Jonathan, but that’s only because photography was still brand new. The first photograph had been taken just eighteen years before he was born, and even then, the first picture of a person wasn’t taken until Jonathan was already six years old.

Considering his age, Jonathan is still in surprisingly good health. Even though he is nearly blind because of cataracts and has lost his sense of smell, he still has excellent hearing a very healthy appetite. In an interview, Jonathan’s long-time veterinarian, Joe Hollins, told Guinness World Records that he and the “gentle old reptile” have formed a very close bond throughout the years.

If Jonathan has learned anything from his 187 years, it’s to not rush life. He lives on the grounds of the Plantation, just chilling and enjoying life with his three other giant tortoise friends: David, Emma, and Fred.