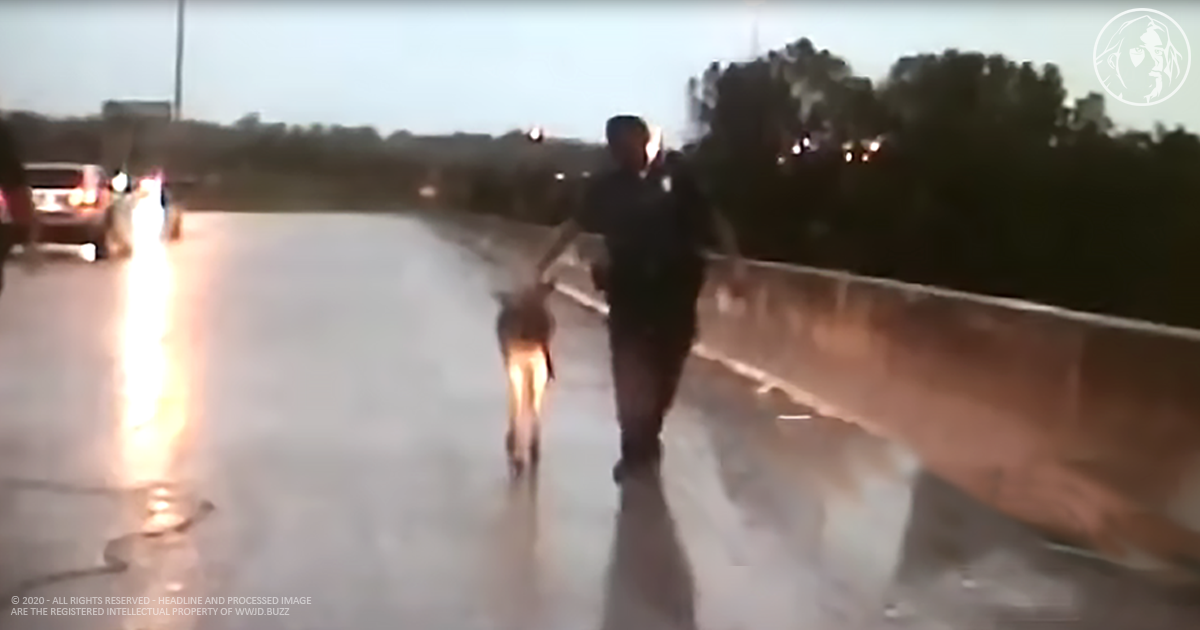 Being a police officer means that while there are often days of unrelenting tedium – while there’s no crime, it also means for boredom. Then again, there will be times when they see something unusual happen.

We posted a while back about a Cincinnati police officer who had a Canadian goose get her to rescue her baby, who was tangled in a balloon. Well, this police officer has a story that might be able to one-up that.

The situation was unfolding in Kansas City, Missouri: There was a thunderstorm going on, the roads were slick, and there was a young deer that was thoroughly disoriented and was slipping all over the place. She was actually trying to jump off the bridge, but couldn’t get enough lift, slamming into the wall instead.

Enter Sergeant Steven Sandusky. He saw the deer had just collapsed from exhaustion and made his way over to her. What would he do, since wild animals are quite unpredictable? The deer didn’t run away from Sergeant Sandusky when he got over to her. She was that exhausted from her panicking.

There was a concern that she had broken her leg, but she had it stuck in a drain pipe. One of the other police officers ran off to get a rope, but that turned out to not be necessary. The police sergeant was able to guide her gently, using his police baton to nudge her in the right direction. She was walking alongside him like she was a dog.

He let her off at a grassy park, and she collapsed at first in front of a statue, but then was gone an hour later – she probably just needed to get some rest. This could have been a tragic scenario – if the deer had been able to leap over the bridge wall, it was a very long way down.

Fortunately, Sergeant Sandusky was able to get there and prevent a tragedy while also making sure that his own officers were safe. Along the way, he also got a story that he’ll be able to tell his family members for years to come. This was a case where everyone benefitted. Check out this amazing rescue story in the video below.