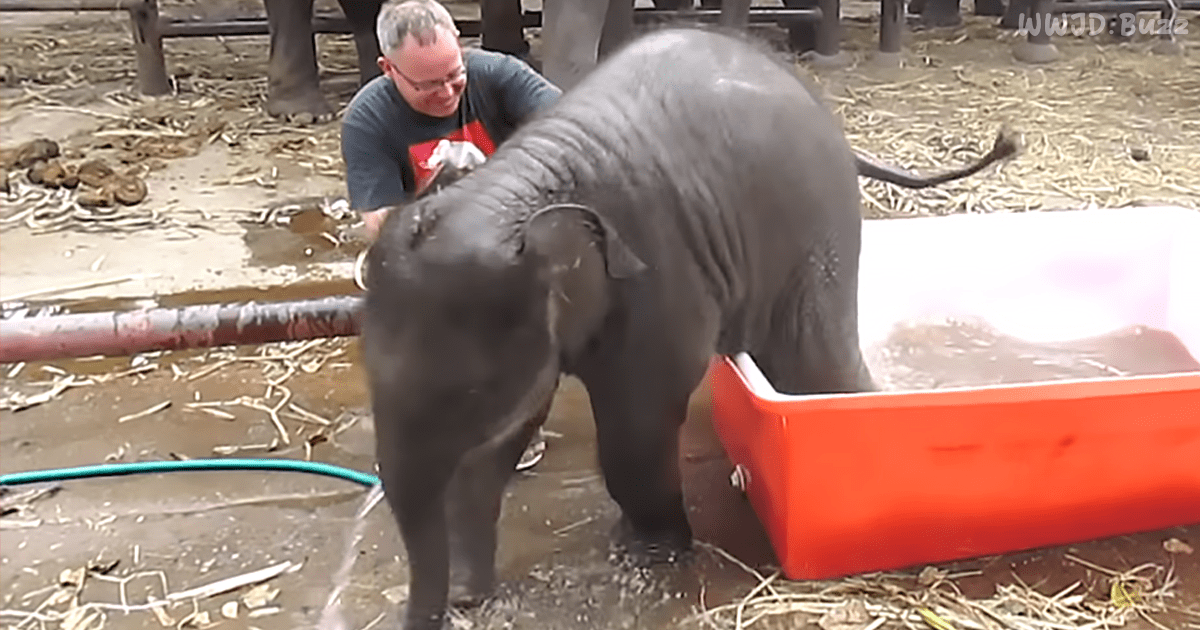 There’s just something SO awkwardly endearing about baby elephants. Part of it is that they seem to be ALWAYS smiling behind that trunk of theirs. They are also like little cars that are trying to learn how to walk. They can be endearing to watch… as long as you stay a reasonable distance from them. I was smiling the whole time I watched this video of an elephant trying to bathe himself.

This elephant lives in reserve called the Ayutthaya Elephant Palace & Royal Kraal in Thailand. People can watch the elephants in their habitat. A helper is nearby, washing down this baby elephant with a hose while the little guy tries to figure out his custom-made tub.

It does not go well. The little pachyderm moves like he has all four left feet. Once, when trying to climb in, he falls in face first. It’s hilarious.

He’s such a good sport about all this, though. There’s even a moment when he grabs the hose from the worker and runs around with it. Mommy’s watching nearby, comfortable with what’s going on. That’s good since you do not want to mistakenly make a mommy elephant mad. You’ll be a pancake before you can get one word out trying to calm her down. That’s why working with these animals is great, but also dangerous.

As cute as this video was, there was just one teensy ick factor. The last time that the elephant starts climbing in the tub, it lets out a giant poop right outside. Hey, it’s still an animal, and it answers the call of nature when it has to. It can’t grab a newspaper or magazine and head over to the nearest outhouse though it would be cool to see. Still, that aside, it was such a cute moment.

Wasn’t this little elephant so adorable? Would you go to a place like that? Please leave a comment below!

Share this adorable video with your friends and family on Facebook because it will give them a great big smile… or two… or three! It will make them happy and you, too!