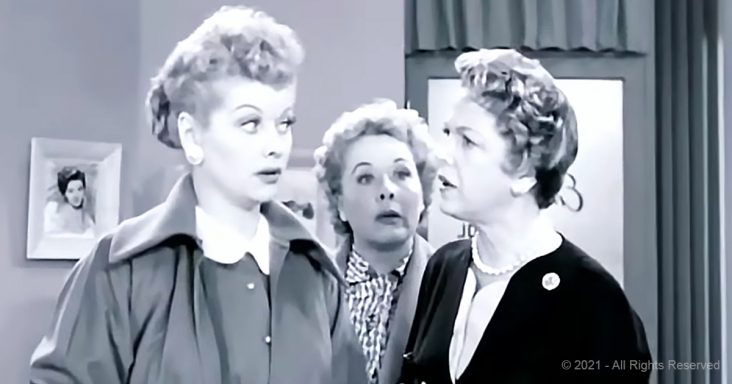 In only a few minutes, the charm school gave a glamor makeover to Lucy and Ethel. It was an unforgettable moment that led to one of the biggest laughs on live television.

When Lucy thinks up a new scheme, her best friend Ethel is right there to back her plan. This time around, the scheme was about teaching their husband’s lesson. After catching Ricky and Fred staring at another woman, charm school becomes the answer to win their attention back.

The charm school instructor is less than impressed with Ethel and Lucy. But one Rocky montage later, they undergo a stunning transformation.

Lucy walks into the room as la Lucy, turning the head of both Ricky and Fred. But the true star is Ethel, who walks through the front door as la Ethel. They both play on the tv trope of the alluring woman with a beauty mark – right down to the cigarette holder.

I Love Lucy is one of the greatest shows of all time, and one of the first sitcoms to include a live audience. They play off the laughs well, and this is one of those scenes that lives on in infamy.

For a live-action scene to play out like this, it was a big deal. It is similar to the introduction of Jessica Rabbit on ‘Who Framed Roger Rabbit’. Lucy pulling off this act in real-time shows why she was the Queen of comedic television.