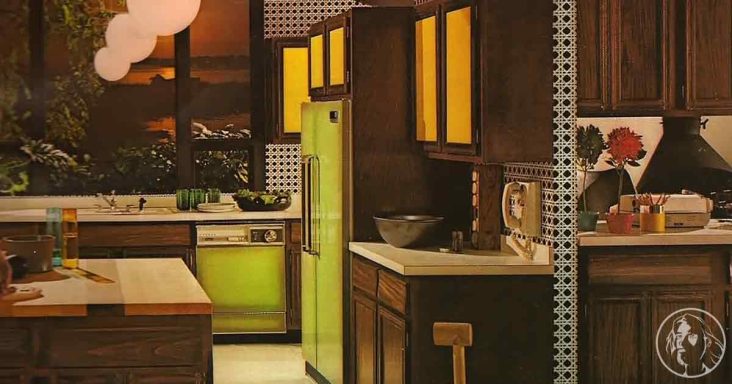 Growing up in the 1960s was an exciting time. Kitchens, for example, had a look all their own. They were as colorful as they were innovative with new designs and appliances.

Homes of the 1960s had a lot of wood for the decor. Kitchen cabinets would often have a wood texture. This choice gave the house a rustic appeal.

You wouldn’t find an island in 1960s kitchens. You would instead find peninsulas where the family would gather. It was the perfect place for a breakfast gettogether or dinner chat.

The walls of 1960s kitchens were also filled with detail. Wallpaper was a popular choice to bring color to the kitchen. Many wallpaper designs all contained mesmerizing patterns.

Whether it was a solid color or pattern, most wallpaper favored warm colors. These colors included bright orange, off yellow, and muted green.

There was more space in these kitchens compared to kitchens of the past. Built-in ovens allowed more room to move. They looked less like ovens and more like cabinets.

Dishes also had their style for the decade. Corningware dishes were usually white with blue flowers.

Even phones took on a different design in the kitchen. Phones would be hung on the wall instead of sitting on a table. It was convenient for those who needed more space on the kitchen counter.

For a faster breakfast, new foods came about. Pop-Tarts made their debut as the pastry of the morning. Popping one in the toaster required little work.

For those who still wanted to cook fantastic meals, there were plenty of resources. The television phenomenon of French Chef inspired many to cook more elaborate dishes.

The kitchen sure has changed a lot since the 1960s. Some inventions remain while some styles have been altered. One thing can’t be denied: the 1960s were a time of great innovation, so you can quickly point out a kitchen of the era.