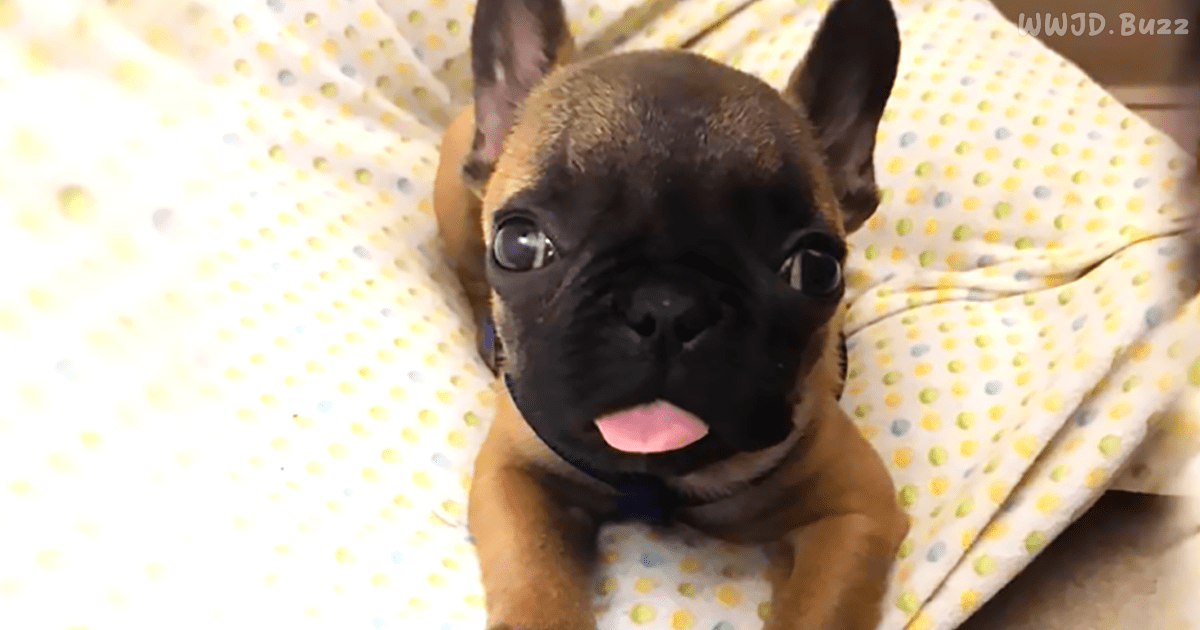 This is the story of a very special French Bulldog, he’s about the size of a baby guinea pig, but he also has the courage and determination of a big wolf.

His name is Auggie, and he was born with a cleft palate, and all the odds were against him for the first weeks of his life, and on top of it all, he needed assistance to breathe and eat until he was strong enough to fend for himself.

Oh, this is heartbreaking, this poor puppy is walking on the line for survival, and he is so tiny he can fit into a teacup!

If you really want to picture how small this pup is, French Bulldogs usually measure around 12 inches and weigh around 28 pounds, they are in fact, a crossbreed between common Bulldogs and English Ratters, with a lifespan of about 14 years.

These breed of dogs are very social, in fact, they require great contact with their human owners, and become very anxious if left alone for too long, so if you are thinking of getting one, keep in mind how demanding they are!

On the other hand, this interesting breed makes an excellent companion since they don’t bark much, is very affectionate and patient, so if you need a furry friend to have around, this could be a good choice for you.

Contrarily to his breed traits, Auggie has some major differences, he struggles to make new friends, mostly keeping close to his human, aww yes he’s a clingy one!

Despite all his shortcomings, this little pup refuses to give up, and even approaches another dog, a big exemplar of his breed. The size difference is stunning, but he doesn’t feel threatened, by the 1:49 mark he even tries to play with his new friend.

The viewers were touched by this heartbreaking case, one fan said “Auggie is such a strong little boy, Meghan you have my respect, it’s not an easy job to take care of animals with special needs. They need round the clock attention…”

Another fan added “Wow! Cute Auggie is one fighter and a tough cookie, He is loved by his awesome foster mom and his doggy buddy. You go Auggie, you are an inspiration to all.

Are you a fan of this kind of dog? Were you charmed by his tiny mug face? Have you ever seen a dog so small? Go watch the video and take a look yourself at this little wonder.