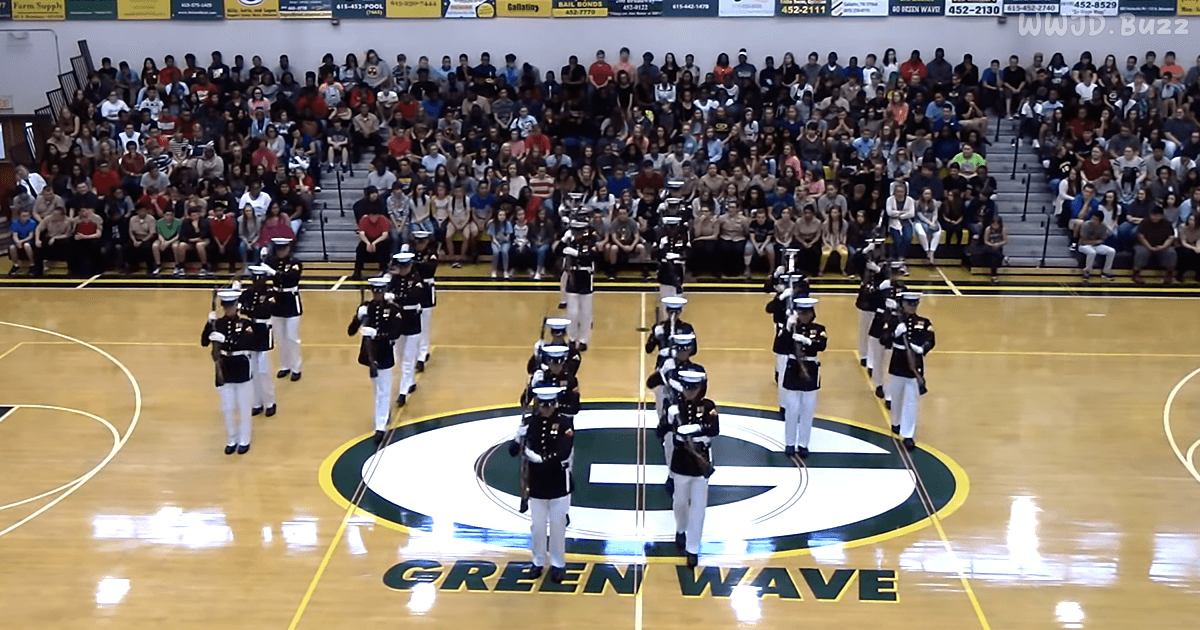 Most people in the military community know how breathtaking drill teams can be. They mesmerize more than any action you might see on a show like America’s Got Talent.

The USMC’s Silent Drill Platoon can overwhelm the casual observer with their discipline and precision in a way that defies description. You feel as though you are on hallowed ground when you watch.

As the announcer told of many prestigious performances by this squad, the audience waited in anticipation. After performing for thousands of spectators, these Marines were ready for this Tennessee school.

This platoon came to show off their skills at Gallant High School, in Nashville, Tenn. Representing the United States Marine Corp and Marines around the world, these marines came to show all the discipline and professionalism it takes to be a Marine.

The silent drill team lined up and marched around the gym, the only sounds coming from them were the simple grunts of when to start and finish. The entire time that the platoon was performing the audience sat in silence. They admired the skill levels of each of these Marines.

Most Americans fear weapons, but these marines were very familiar and comfortable around them. During this show, we see that these Marines were very disciplined when handling weapons. With their fluid movements without hesitation, these weapons fly in the air, always catching them just in time. The audience was filled with pride, as they watched the men flip and twirl the barrels of the guns around with such ease.

The sounds of loud clapping could be heard after the men have shown just how fluid they could be. After lining up and performing a few very disciplined tricks, the only other sound that could be heard in this gymnasium was the sound the butt of the guns make when hitting the floor. The men tested one another in their skills while never missing a beat.

During the entire performance, by keeping their body positioned exactly as needed and their faces straight, we are shown the discipline of the Marine Corp that we all admire and respect. As an American, you cannot look at a Marine and feel anything less than respect for the sacrifices they make for every person in our country.

After seeing this video, I hope you’ve gained even more respect for our Marines.