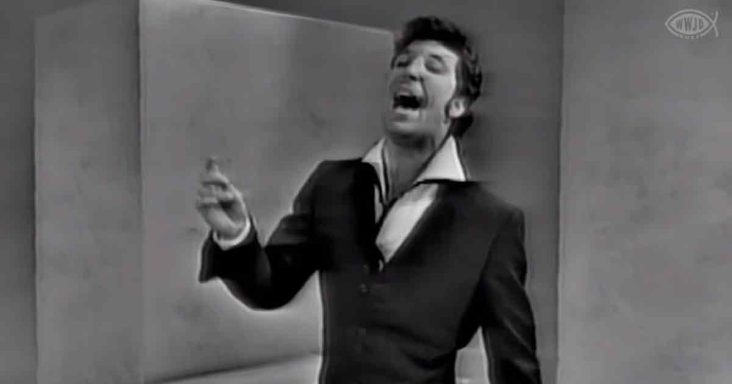 The legendary singer Tom Jones appeared on ‘The Ed Sullivan Show’ in 1965 to sing his smash hit, ‘It’s Not Unusual.’ The high-powered performance made the audience applaud wildly.

Tom is dressed in a dark suit, a high white collared shirt with an open chest. He is swaying from the song’s start while standing on a large box among other platform boxes.

Tom’s long flowing black hair stays perfectly in place as he alternates between small square platforms. He snaps while swinging his hips the whole time, and the audience loves it.

The black-and-white footage still has lots of life, thanks to Tom’s electric performance. The backing band plays precisely what is on the famous hit single. They sound great, and their upbeat playing creates a fantastic accompaniment for Tom’s raspy, soulful voice.

‘It’s Not Unusual’ wasn’t initially written for Tom. Les Reed offered it to Sandie Shaw, but after hearing Tom’s demo, she insisted he record it. The record reached number 1 in the U.K. and number 10 in the United States. It also became the theme song to the TV musical variety series ‘This is Tom Jones’ in the late 60s and early 70s.

You can see his undeniable stage presence even at an early age displayed by Tom. The crowd loves his charisma, and his decades of success prove he has what it takes to be called ‘Sir’ Tom Jones.