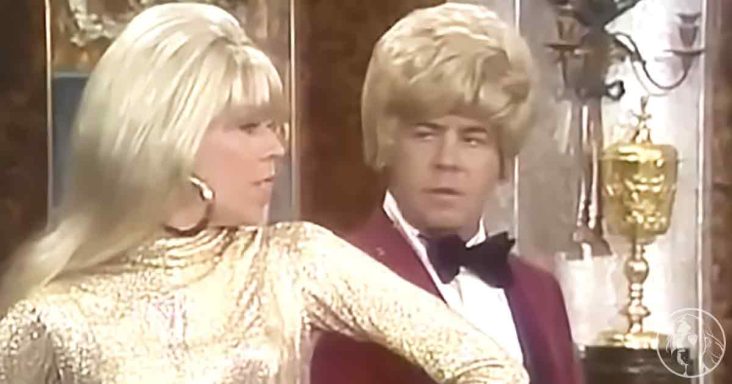 The Carol Burnett Show always had a timeless quality to the comedy. The parodies were also just as timeless, considering their mocked pop culture.

This sketch from Season 5, Episode 21, begins with an introduction to Midnight Theater. A man dressed in a detective’s trenchcoat introduces tonight’s film.

The man says the story will involve a double agent. He promises a spy adventure with sex and violence. ‘Something for the entire family,’ he says with a smile.

After the man leaves, the scene transitions to a study. A woman dressed in a brightly colored dress enters the room. She’s screaming for James.

From another door enters James Blonde. Tim Conway plays the character. He’s dressed in a red tuxedo and has big blonde hair.

As James enters, he acknowledges the woman as the duchess. The duchess then begs for a kiss. James tells her to wait a moment.

James walks over to the glass doors leading to the terrace. There’s a man outside with a gun. James walks by the door and looks at the lamp next to it.

James tells the duchess he has to adjust the light. As he picks it up, he aims the top of the lamp toward the man outside. The lamp then fires like a gun, killing the assassin.

James puts the light back down on the table as the assassin dies. ‘I must remember to send a note to my decorator,’ he remarks.

James and the duchess then embrace for a kiss. As they kiss, another woman enters the room. The blonde woman is dressed in a multi-colored dress. The two women fight over James.

James pushes himself away from both the women. He says he needs to make a phone call. As he dials, an assassin rises from inside one of the lamps.

James turns out and uses the phone as a gun. It fires a bullet and kills the assassin. Another Bond-style gadget concealed in the room saves his life.

James calls that weapon ‘Dial a Shot.’ He speaks into the phone repeatedly, telling the operator to reload.

Frustrated with the women, James pushes both of them out of the room. He then says he needs to call headquarters. Unfortunately, he uses the gun phone to make the call.

As James picks up the phone, a bullet goes through his hair. James checks his head, but he’s okay. He informs the operator that he was just grazed.

After James hangs up the phone, he hears a knock on the door. He invites the stranger inside. James attempts to strike the trench-coated man who enters.

James, however, is clumsy. As the entering man picks up his dropped newspaper, James stumbles out the door. James enters from the opposite door to greet the man known as Z, a parody of James Bond’s tech expert Q.

His fellow spy informs James that an evil mastermind is blackmailing the world. The man reveals the villain is Dr. Nose. He unravels an illustration to show off the villain’s long nose.

Dr. Nose is holding cities for ransom with bombs. Z then gifts James a new weapon: the finger gun. Before leaving, the fellow spy informs James of a femme fatale named Passion Plenty.

Before Z leaves, James tells the man to take care of himself. As he does so, James points and accidentally fires his finger gun. Z collapses to the floor, dead as he leaves.

James tries to shut off the finger gun, but it doesn’t work. He finally finds the safety located on the fingernail. James then waits for Passion for entering the scene.

Passion Plenty, played by Carol Burnett, enters a golden outfit with blonde hair. James invites her inside. The two then pose in sexy poses as they speak.

Passion informs James she’s been sent by Dr. Nose to distract the spy. As James tries to impress Passion, James’s finger gun goes off in his pants.

Trying to look cool, James makes Passion a drink. He then says Passion’s seduction won’t work. They attempt to show off their sex appeal with their legs.

A battle of sexy poses breaks out between James and Passion. Passion then proposes a kiss-off contest. They approach each other for this match like a wrestling sport.

The two grip each other and kiss in an absurd battle of seduction. Eventually, James kisses Passion to the ground. He then gives a countdown to declare himself the winner, as though he were in a boxing match.

James tries to leave, but Passion begs him to stop. He finishes her off by blowing her a kiss. Passion collapses in ecstasy with a goofy look on her face.

James leaves the scene to find Dr. Nose’s laboratory. Inside the lab, an army of women is in attendance. The lead woman, also played by Burnett, addresses Dr. Nose as he enters.

The woman asks where he has been. ‘None of your business, don’t be nosey,’ replies Dr. Nose. He then blows his comically large nose.

Dr. Nose then checks how his ransoms are being paid. New York has paid him two million dollars, one million from Chicago, and $17.92 from Philadelphia. This angers Dr. Nose.

Dr. Nose starts throwing beakers around the lab. James then enters the lab on a helicopter. The presence of a ladder descending from the ceiling confuses Dr. Nose.

Dr. Nose instructs the woman to kill James Blonde. James tries to stop her with a paralyzing kiss. It doesn’t work.

When James asks why his kiss didn’t work, Dr. Nose informs him that he gave her plastic lips to fight off his charm. James is then taken away by the woman.

Passion says she failed. Dr. Nose says it doesn’t matter as he’s preparing to execute James. Passion tries to deny her feelings for James, but Nose can see she loves him.

James is brought out on a platform he is strapped to. Dr. Nose prepares to fire a laser at a helpless James. Passion, however, won’t let Dr. Nose kill him.

Passion starts kissing James and begging that Dr. Nose spare his life. Dr. Nose threatens to kill Passion in addition to James. That’s enough to get Passion out of the line of fire.

Dr. Nose slowly starts firing the laser upwards at James. Passion, however, stops the laser with a kick and frees James.

James prepares to fight, but Dr. Nose has a secret weapon. He reveals that his nose is also a gun. Dr. Nose threatens to shoot at James if he tries anything funny.

Passion interjects and says she loves Dr. Nose instead. She tries to kiss him and makes him bend his nose back into his ear. Passion uses this opportunity to put pepper up his nose.

A gunshot is heard, and Dr. Nose collapses dead. James asks what happened. Passion explains she made Dr. Nose blow his brains out with his nose gun.

The audience laughs at this. Passion then stares at the audience and says, ‘He did.’ James says that’s an old trick, and Passion agrees.

James and Passion both admit they’re getting out of the spy business. They then get rid of all their ridiculous gadgets. This includes cyanide wisdom teeth and atomic underwear. The atomic underwear explodes.

James says that the rest of his life will be spent with Passion. He points to them both and sets off his finger gun. The two collapses dead as the sketch ends. The audience laughs and cheers. 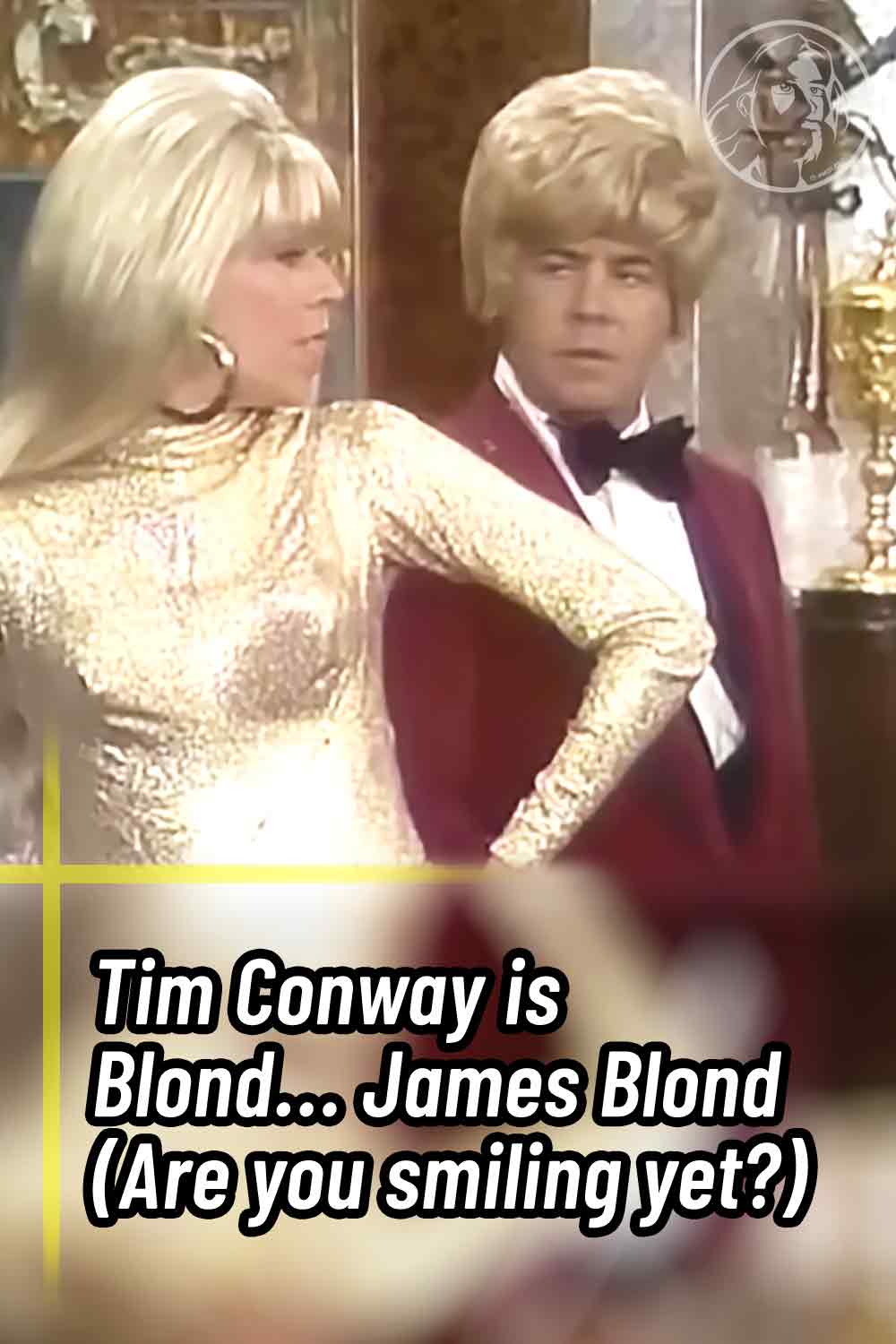