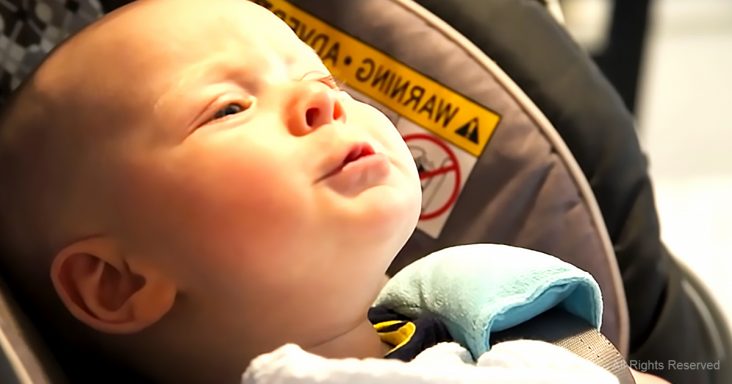 The angelic singing of a family friend kept 4-month-old Adler silent and delighted for several minutes. He even tried to mimic her and sing along.

A woman, Annie, started singing “I know I need to be in love” by Karen Carpenter while sitting at a kitchen table. In front of her, in a car seat on the table, sat 4-month-old Adler.

As she started to sing, Adler looked lovingly towards her, not able to look away. The child’s attention couldn’t be broken and it was endearing how captivated he was by Annie’s spectacular voice.

Luckily, a camera was nearby. Another friend, John, grabbed it and started recording. As Adler starts trying to move his mouth to the words, he zoomed the camera in to focus on him. It’s clear Adler was trying his hardest to recreate the angelic sound of Annie’s voice.

When Adler wasn’t moving his lips and cooing, he was smiling as big as possible. Annie’s voice was light, warm, and inviting. The calming sound reaches his little heart and made him feel so much joy he couldn’t help but share it.

Annie kept her cool through the whole song, but as soon as her final note was done, she jumped out of her seat. “Doug, it was so cute!” she exclaimed to another listener. “The entire time I was singing he was [singing along].”