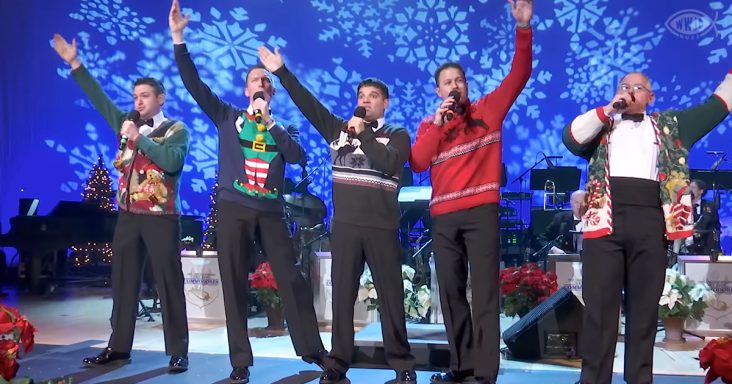 The United States Navy Band had everyone laughing with their rendition of ‘The Christmas Can-Can’ as performed by Straight No Chaser. Their concert took place at DAR Constitution Hall, Washington D.C.

It was a beautifully decorated stage with giant snowflakes in the background and several Christmas trees covered with lights scattered about. Everyone was dressed warmly for the chilly weather.

The singers were Chief Musician Michael Belinkie and Musicians 1st Class Dave Sigmon, Ben Bransford, Bill Edwards, and Robert Kurth. Each of them wore their own very vibrant and interesting sweater.

As they began to sing, one of them introduced the song as one of the most beloved Christmas songs. Already the audience was laughing. When they sang, they showed their fantastic voices.

The song’s lyrics are humorous, but their choreography made it even funnier. Their delivery of the lines was impeccable, and their expressions were hilarious.

They all smiled as they performed. The singers even used funny voices while still singing in key and providing flawless backup vocals. By the end, they were doing the signature can-can dance.

Arm-in-arm, they were kicking and hopping. It was an energetic show that they put all their effort into. After the performance ended, the crowd laughed, cheered, and applauded while the singers walked off the stage.