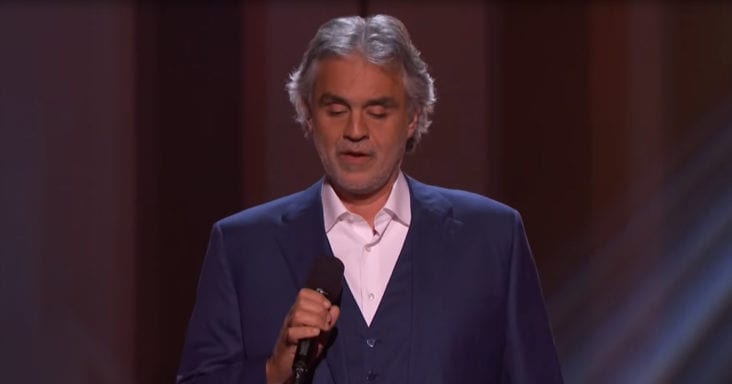 Many times, tributes are given to people once they pass away. This is why normalizing how we feel about the people in our lives while they’re here is essential. Italian singer Andrea Bocelli got the opportunity to show one of his favorite musicians how he felt.

During a tribute concert dedicated to Stevie Wonder, several world-renowned musicians took the stage. The show was called Stevie Wonder: Songs in the Key of Life – An All-Star Grammy Salute, and it was held at the Nokia Theater in Los Angeles.

There were jaw-dropping performances from people like Ed Sheeran, Lady Gaga, Beyonce, and John Legend. One of the highlights of the night was when Andrea Bocelli took the stage to sing Wonder’s hit song, “I Just Called to Say I Love You.”

Andrea started his flawless performance by telling Stevie that he’s a great composer and a musical genius. Bocelli proceeded to belt out a spine-chilling cover of the 1984 classic song, and Stevie couldn’t help but smile as he watched and sang along from the audience.