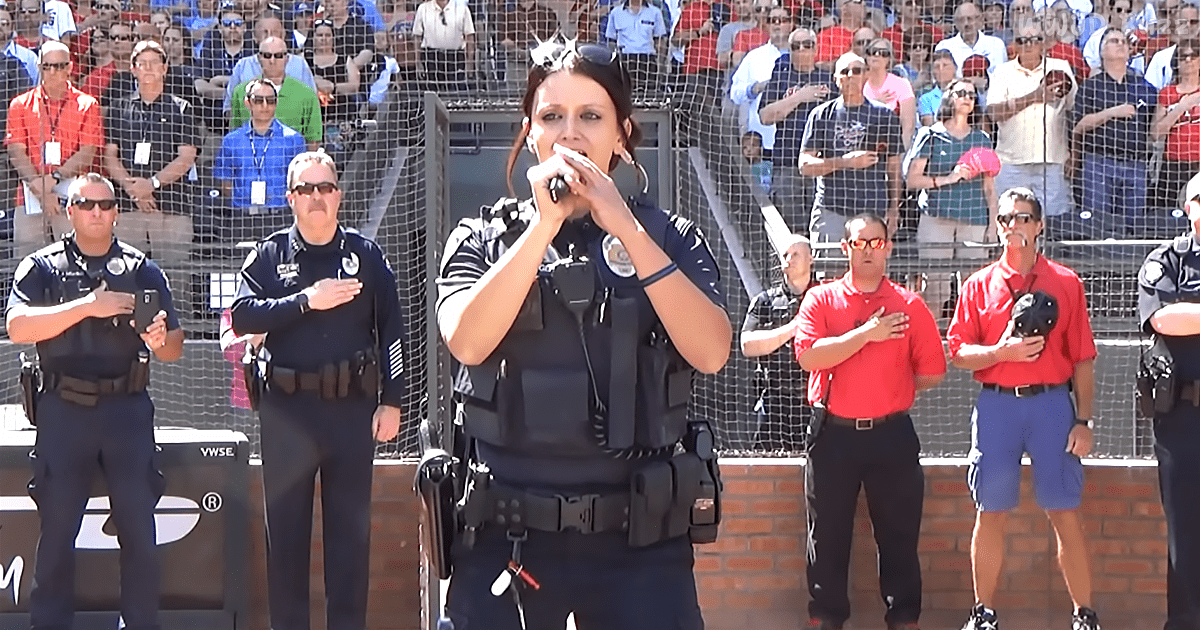 The city of Surprise has a lot to be proud of, and police officer Tanya Keplinger lived up to the town’s name during a baseball game at the Surprise Stadium.  “The Surprise Police Department is proud of Officer Tanya Keplinger’s dedicated service to the City of Surprise and the United States of America,” reads a message on the police department’s official YouTube posting of the grand event — Her singing performance is breathtaking.

The Surprise Police Department provides itself on community policing and progressive crime prevention. Situated approximately 45 minutes northwest of Phoenix, near White Tank Mountain Regional Park, the town was founded by Flora Mae Statler in 1938. She also gave the municipality its catch name. Although she intended irony, saying she would be surprised if the town ever amounted to much. Flora was one smart cookie and knew her small town would one day make it big.

What started as a one-square-mile, one gas station town, has undergone stunning grown over the decades to 108 square miles. In 1960, the city was incorporated as a city, and today boasts nearly 130,000 residents. It’s primarily a draw for retirees, who flooded the city by the tens of thousands starting in the 1990s. Those gorgeous mountains, a nearby lake, and the breathtaking Sonoran desert make Surprise an especially attractive recreation spot.

The city has also created a detailed book and DVD documentary combo that it sells through the city government’s official website. The area’s history starts with the ancient Hohokam Indians, and extends through the “Cotton is King” era and the coming of the city’s first railroad that connected this once-rural agricultural outpost to the likes of Phoenix, AZ and Las Vegas, NV.

In addition to a robust passion for America’s greatest pastime, the city also boasts the largest tennis and racquet facility in the Southwest, and numerous golf course and pools. With beautiful sunny weather “almost” all-year-round, you can understand why those things are a must!

The Surprise Police Department is no exception to the town’s unique charm.  Their small but community-minded law enforcement officers always go the extra mile.  When Tanya Keplinger stepped up to the mic, this seasoned crooner glided through a minor technical glitch with the mic like a pro. She then brought the house down with Francis Scott Key’s American classic.

Watch Officer  Tanya Kepler’s moving performance here, and you’ll agree with me: She needs to try out for “America’s Got Talent.”

I would give her the Golden Buzzer. She has a commanding stage presence, poise, charm, charisma, and command. I’m blown away that she’s also a cop and very, very proud of the Surprise, AZ police department.