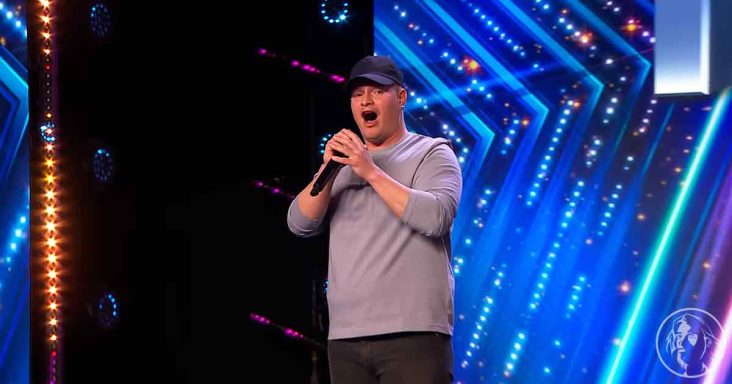 Like most other Britain’s Got Talent videos, this clip begins with introductions: “My name’s Maxwell.” After explaining that he’s from Sheffield, Maxwell Thorpe says that his friends, father, and family have come to watch him perform.

Judge Amanda Holden asks Maxwell what he does for a living, and he explains that he has been busking (playing music) in the streets of Sheffield for the past ten years.

After a brief interlude, the performance begins as his dad smiles and claps in support of his son. A few lines of dramatic piano music play before Maxwell opens his mouth, beginning to sing Luciano Pavarotti’s 1986 song ‘Caruso.’

Singing somewhat softly at first, his vibrato execution is excellent. As the song continues, Maxwell opens up his voice, reaching higher notes in a warm, rich, and full tone.

You’d never have expected this voice from appearances alone: he’s wearing only khakis, a long-sleeve shirt, and a simple baseball cap, but the operatic voice that rings audibly from his mouth is undeniably beautiful!

Simon is smiling, the camera is panning around the audience, and everyone stands up to clap as the performance ends. Maxwell waves to the eager crowd, seeming to feel a combination of honored and relieved.

“The hairs on my arms stood up literally as soon as you started,” Alesha Dixon tells him as the other judges also shower him with praise. Unsurprisingly, Maxwell has earned a “Yes” from all four judges. The scene draws to a close as Maxwell, looking proud, waves to the crowd as he walks off stage.