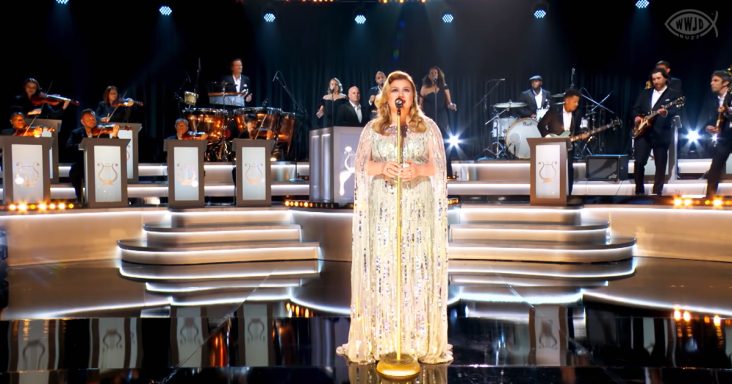 Kelly Clarkson celebrated Christmas early this year as she recently released her new single “Christmas Isn’t Canceled (Just You).” The single is a part of her album When Christmas Comes Around.

When Christmas Comes Around is Kelly’s ninth studio album, which has a mix of holiday classics and new songs. Most of them were collaborations with various artists such as Ariana Grande, Brett Eldredge, and Chris Stapleton.

However, her stage performance of “Christmas Isn’t Canceled (Just You)” had recently grabbed the attention of a lot of online followers. Clarkson wanted to cheer up the people who had recently experienced heartbreak during Christmas through this song.

Although the song was a peppy number, it had several emotions. There is no doubt that Kelly is a fantastic vocalist and an incredible writer. She wore a sparkling golden gown for the live performance, looked like a diva, and had a confident look.

Kelly was accompanied by several musicians who enjoyed performing on stage with this talented singer. She also had a few singers who joined her in the chorus. She looked confident and beautiful while singing this beautiful song about heartbreak during Christmas.

The lyrics of the song are emotional but, in a way, can encourage listeners to not give up the joys of life when they are heartbroken. The talented singer had a powerful voice and had great control over her voice. Many people who witnessed her singing on stage said that she sounded even better live.

Kelly’s vocal abilities are God-gifted, and her performance was fantastic. Her fans believe that this was one of the best Christmas songs released recently, and they would love to add it to their Xmas playlist.