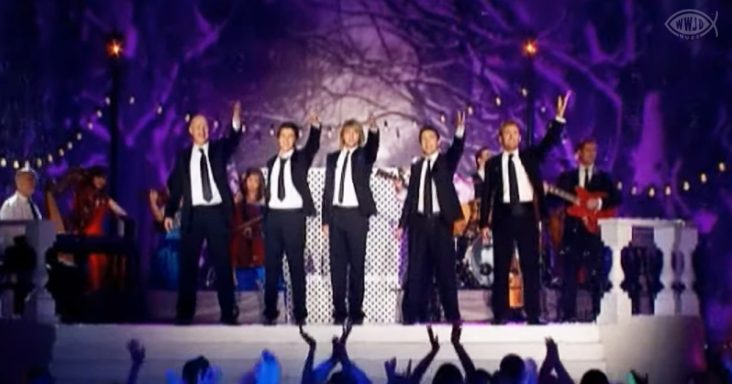 Celtic Thunder Christmas is a varied mix of holiday classic songs for everyone in the family. This album features many all-time favorite songs for millions of people, sung by the members of the Celtic Thunder.

Celtic Thunder has been recognized as BILLBOARD’s Top World Music Artist. The group is a powerhouse in both solo and group ensemble songs. Recently, a Celtic Thunder live performance had grabbed a lot of attention during this festive season.

The performance began with Celtic Thunder member Damian Mcginty’s solo performance to the song “Winter Wonderland” from the album of the same name. The song was initially sung by Perry Como in 1946.

The stage’s background had snow-filled Christmas trees with the entire scene set up as if it was actually snowing. The next performance was again a solo performance by Keith Harkin, who sang the song “Last Christmas” by George Michael from the album “Last Christmas.”

The audience enjoyed the performances as they started to sing along with the singers. The next performance was a duet by Ryan Kelly and Charlie Bird to the song “Baby, It’s Cold Outside.” The two singers sang the song in perfect harmony and impressed the audience.

The last performance was a group performance by the Celtic Thunder group. They sang the songs The Most Wonderful Time of The Year & We Wish You a Merry Christmas.

The performance received a standing ovation from the audience. All the audiences listening to the songs were impressed by these talented singers’ performance and joined in to sing along and wished them a Merry Christmas & a Happy New Year.