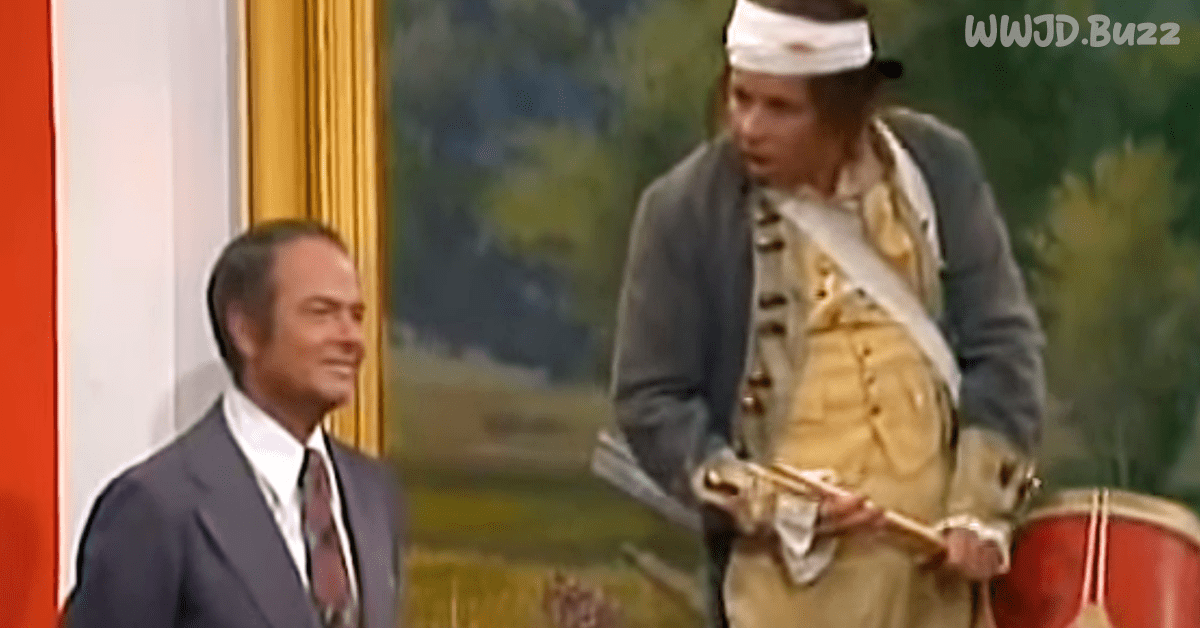 Watch their hilarious parody of the “Bicentennial Minute” TV spots of the 1970s.

If you were around during our nation’s bicentennial decade, you doubtless remember fondly the many ways it was celebrated in every quarter, including on TV.

The most memorable spots were probably the “Bicentennial Minute” segments on CBS—the same network that ran The Carol Burnett Show.  They were usually narrated by Vice President Nelson Rockefeller or First Lady Betty Ford.

In this hilarious parody, the spot is narrated by “Harvey Korman, the Actor” standing before a tableau of Patriot soldiers including “drummer boy” Tim Conway.

Before he even opens his mouth, the audience totally loses it as soon as the camera goes in on his dopey face. Tim is such a master of the reaction shot!

As Harvey narrates a story about the bravery of the tattered troops and the faithful drummer boy who kept them marching onward,  Tim fearfully ducks and dodges explosions and even a flying cannonball.

Finally, he steps out of the tableaux to confront Harvey face to face.  You won’t believe what happens next. Let’s just say it involves a drum and Harvey’s head. Harvey was a good sport as always!

Here’s a savory tidbit we’ll wager you weren’t aware of: Harvey and Tim initially worked together on The Danny Kaye Show in the 1960s.  Both comedians had so much respect for each other that when Time joined the cast of The Carol Burnett Show in the 1970s, Harvey couldn’t have been happier.

For years after the series ended, Tim and Harvey always sought out opportunities to reunite on stage, film and television.

“In these trying times, you, Harvey and Carol are a godsend,” wrote one adoring fan in a comment aimed directly at Tim Conway.

“The things those brave Revolutionary War heroes endured, it makes one stop and think, and remove one’s hat in respect. They forged the greatest country this planet has or ever will see. God bless their memory,” wrote another fan in praise of this hilarious sketch.

With all honors and respect paid to our great past, let’s start the show. Do you hear that drum beating?   That’s your call to action to click the video below and roll in the floor laughing. You’ll want to share this far and wide. Enjoy!