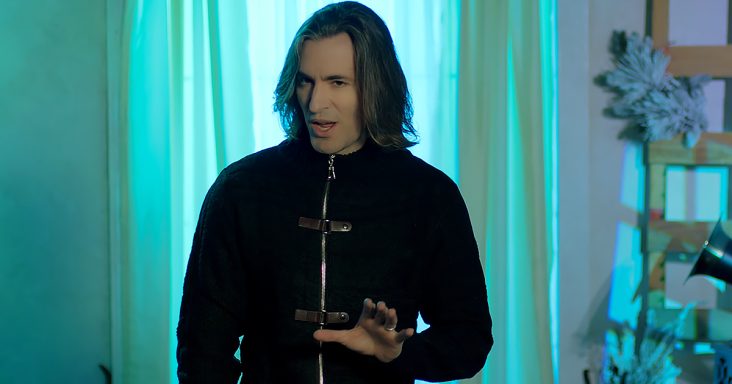 Geoff Castellucci sang the most fantastic version of ‘God Rest Ye Merry Gentlemen.’ He provided his own backup vocals, and through the power of video editing, there are four different versions of himself singing together.

Behind him, there are green and blue lights. The windows are covered with thin white curtains, and a Christmas wreath hangs on the wall. There are also several candles scattered around the room.

The light reveals Geoff, and he starts to sing with his low and powerful voice; it is like the soft rumbling of an earthquake. From behind the windows, the light flashes to match the music.

He continues to look straight ahead as he sings, and he moves his hands to follow his own cadence. The entire performance is mesmerizing as he seamlessly switches from a low voice to a higher pitch.

As he sways, the music becomes faster and more upbeat. Geoff smiles as he sings, and not a single note is out of place. All versions of him harmonize wonderfully.

The performance nears its end, and the light glows white when Geoff sings with his heavenly vocals. He makes the entire thing look effortless and extraordinary.

Geoff’s voice is unbelievable, and his arrangement is impressive. He was able to take a simple melody and adapt it in his own way. It may be the best rendition of the famous Christmas song.