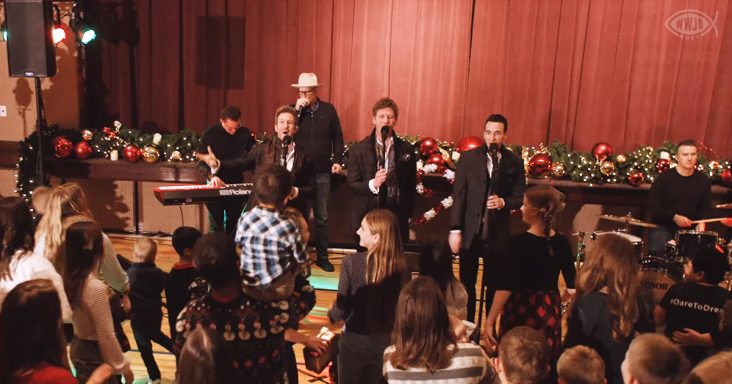 “Go Tell It on the Mountain” is originally an African-American spiritual song written by John Wesley Work Jr in 1865. It was later sung by many gospel performers and is now considered a Christmas carol.

The song celebrated the Nativity of Jesus and the true spirit of Christmas. Recently The Gentlemen Trio, also known as GENTRI, sang the song “Go Tell It on the Mountain” in their Christmas album “Season of Light.”

GENTRI comprises three fantastic tenors: Brad Robins, Casey Elliott, and Bradley Quinn Lever. The song’s arrangement was a pretty modern one and had a great storyline showing the true meaning of Christmas.

The song began with a little boy Christopher eating his breakfast while he looked at an invitation pamphlet stuck on the wall. The flyer was an invitation to a neighborhood Christmas party. Christopher got pretty excited and wanted to invite all his friends from his class.

However, he was skeptical about inviting one of his fellow classmates, Drew. He tried to visit Drew’s house a couple of times but was not bold enough to give him the invitation as Drew appeared to be a tough guy to deal with.

Christopher gathered a lot of courage and finally gave the Christmas party invitation. Later, he distributed the invitation to all the kids at his school. Although it was hard to invite Drew to the party, Christopher never lost hope and chased his classmate.

He left a note at Drew’s doorstep stating that he would need his help with the Nativity set for the Christmas Party. Christopher asked him to carve a sheep, which Drew gladly completed and went to the Christmas party. In the end, both the boys became friends and enjoyed the Christmas party dancing to the song “Go Tell It on the Mountain,” which was performed by GENTRI.