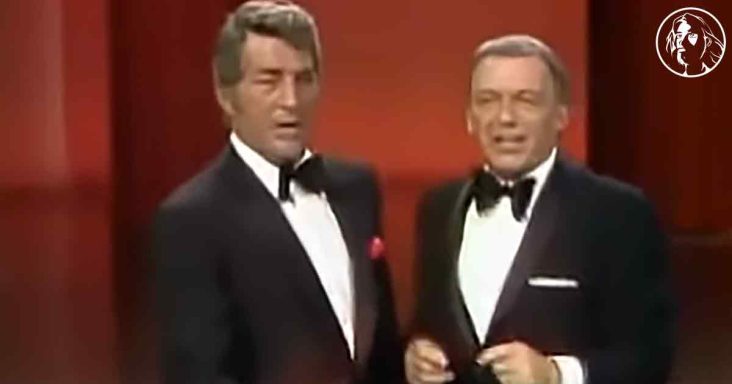 The show was known for featuring plenty of celebrity guests. Some notable guests included Bob Newhart and Bing Crosby.

One of the most legendary guests was Frank Sinatra. Sinatra would join Martin on stage for a duet of comedy and music. Given their charisma, it shouldn’t surprise anyone that they’re a dynamic duo.

The two singing legends walk out on stage in slick tuxedos. With the crowd eager to applaud, they break right into the song. Frank and Dean start with ‘Love is Just Around the Corner.’

Watch how effortlessly the two have chemistry. In one moment, Dean says the lyrics, ‘She walks like an angel walks.’ Frank has the perfect comeback: ‘What else does she do?’ The audience can’t help but laugh at their hilarity.

As they continue to sing, there seems to be a duel of humor. It’s almost like a dare between the two to see who will have broken down laughing first. The winner certainly seems to be Sinatra.

Even when Dean tries some funny movements to switch it up on Sinatra, he can hardly contain his laughter. You can see just how easily Martin starts struggling with the lyrics. Sinatra even gets more physical with hilarious results.

Frank and Dean keep singing with an outstanding balance of singing and silliness. Watching them mug for the camera makes those smiles infectious. There’s never been a more fantastic duo of music and comedy.

The two stars bring their set home by harmonizing beautifully with ‘Guys and Dolls.’ The audience applauds as the two get in one more bout of physical jostling before leaving—what a fantastic collaboration of two towering titans of entertainment.