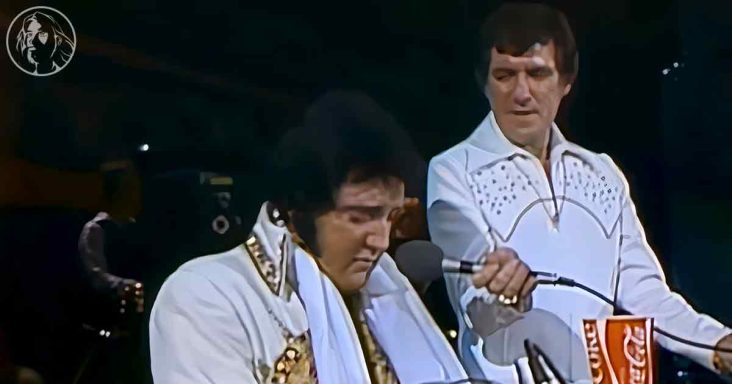 There’s no question that Elvis Presley was the king of rock and roll. He had a way of driving a crowd wild with his performances.

Those who grew up in the 1960s and 1970s will know his hit tunes well. Classic songs such as ‘Jailhouse Rock’ and ‘Hound Dog.’

His final performance was at a concert in 1977. He was not doing well, but he still performed.

In this video, Elvis plays to a crowd in Rapid City, South Dakota. This performance would serve as both a TV special and a live album. Sadly, it would fully come to be.

At this concert, he sang ‘Unchained Melody’ by The Righteous Brothers. It’s an emotional and powerful melody. It’s also the perfect final song for a performer who didn’t know this concert would be his last.

Elvis sits at a piano and starts playing. After so many years, he still knows how to rock the piano. He can still belt out a tune as no other rock star could.

As someone holds a microphone for him, Elvis puts everything he has into his voice. He hits the high notes and low notes with pure grace. You can hear the audience cheering.

The close-ups reveal how much Elvis is sweating and struggling with exhaustion. He’s dripping with sweat and yet still maintains the melody. There’s raw emotion in his performance.

He brings the song to a towering conclusion. After finishing on the piano, he gets up to thunderous applause. For a brief moment, you can see the smile on his face.

This final footage has been lovingly preserved in a 4K restoration. The great detail ensures that generations to come will be able to know and love Elvis. It serves as a beautiful companion piece to the recent Elvis movie.

As a bonus, this video also featured footage of Elvis at the Indianapolis Airport in 1977. It’s one last piece of footage with the king before he indeed left the building forever.