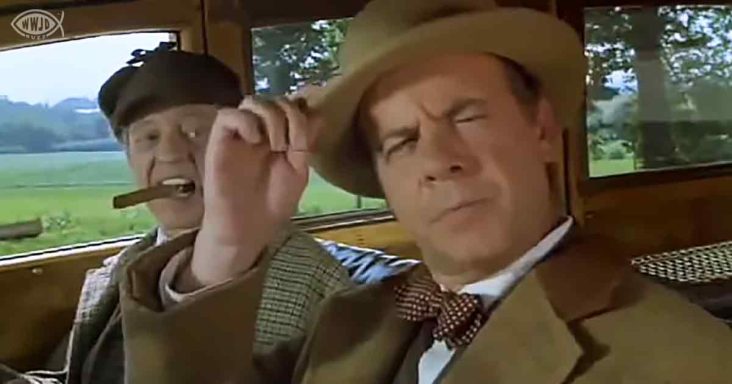 Tim Conway and Don Knotts star as two clunky detectives in the classic comedy movie “Private Eyes.” They leave their mark wherever they go, and this gas station is no exception.

Trundling down the road to their next big case, Knotts pulls out Conway’s “brilliant” invention of a time gun. It shoots a bullet every hour, putting a hole in the car window.

Exasperated with Conway, Knotts suggests they pull into a gas station to fuel up and get directions. The gas station attendant is thrilled to have such celebrities grace his little store.

He chats up Conway and Knotts who give him autographs to his delight. Conway mistakenly chugs a bottle of oil, making him look like the “idiot detective” the papers make him out to be.

The other attendant is less than impressed by the two P.I.’s. He doesn’t even speak a word as he gestures toward their destination. Knotts thanks the gentlemen as they pull away from the station.

The excited attendant remarks on how these guys always leave an impression everywhere they go, just as a lighted cigar of Knotts’ accidentally sets the entire gas station on fire.

As the building blows up behind them, the two detectives don’t even turn to look. Conway remarks on how he should check out the muffler. Try not to laugh as you watch these goofy antics!