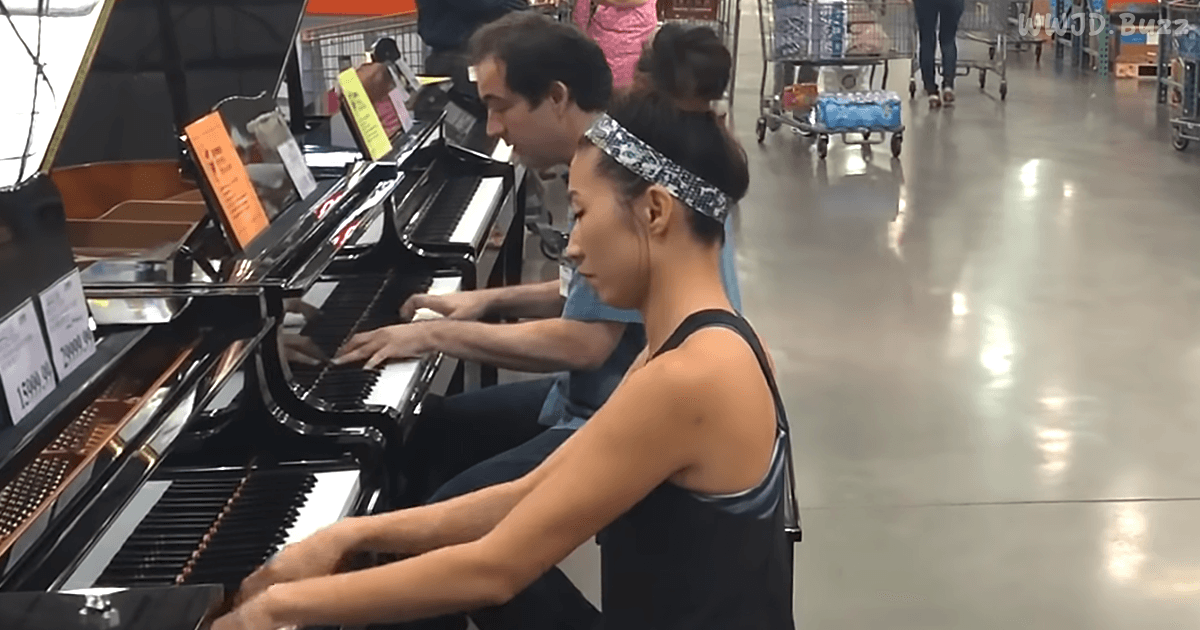 One of the most popular shopping spots is Costco, you can get just about anything there and the prices are hard to beat.  It’s an all-around great shopping experience for everyone.

But what about brilliant live musical performances? And we’re not talking about buskers here. Customers at this Costco store were treated to an unexpected impromptu concert when the store’s piano salesman began to play a popular Adele tune, ‘Someone Like You’, on one of the display units. No sooner had he commenced when a shopper sat at the piano next to him and joined in.

What happened next has gone viral. Shoppers were treated to a lively rendition of the tune, with the talented young woman even outdoing the salesman with her undeniable musical ability.

As they played, customers strolled past, clearly appreciating the awesome performance. One delighted dad hovered in the background for the entire performance, his toddler on his hip, gently swaying to the melody. The pair of them were thoroughly enjoying themselves. Something to tell Mom when they got home!

Thankfully, a fast-thinking bystander whipped out their cell, caught everything on camera, and it was posted online for everyone to enjoy. Since the lady on the piano originally posted this on her YouTube channel a few years back, it has had over ten million views!

This isn’t the first time that soloists have popped up at shopping centers. Another shopper at Costco, a very young boy, also went viral with his impromptu performance on one of their pianos. The child must have been a musical prodigy, he faultlessly played a complex classical piece completely by memory and has clocked up over 2 million views on YouTube since it was posted.

There are viral videos similar to these happening all over, in places like hardware stores, music stores, airports and train stations. So, does this mean that shopping centers are the place to go to get noticed for your vocal skills or musical talent? The clear winners here are the customers and bystanders, may they always keep their cells at the ready for the rest of us!

If you liked this duet, share it with a friend because smiles are hard to come by these days, and this video has a ton of ’em for you to share.