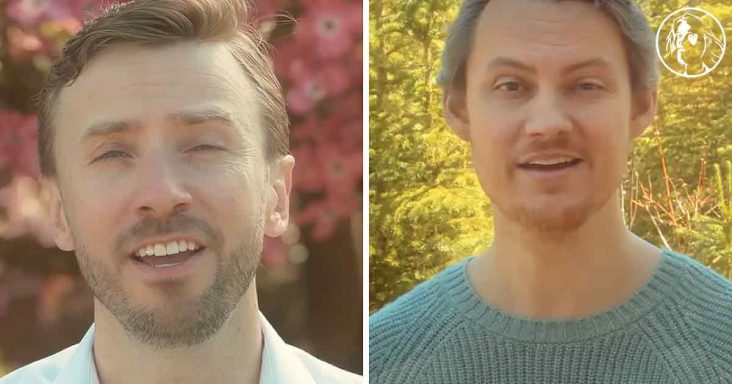 Peter Hollens and Tim Foust are two vocalists with soothing voices. Their voices were built for acapella. The duo is ideally suited for covering a Billy Joel song.

Their latest video sing Billy Joel’s, ‘And So It Goes.’ Joel wrote the Scottish-inspired ballad in 1983. It would debut on his 1989 album, ‘Storm Front.’

The video for the cover features Peter and Tim among gorgeous woodland landscapes. Tim is the singer in the gray sweater next to towering green trees. Peter is in a white shirt in a setting with lusher colors.

The two singers harmonize well in the opening, blending their ‘ooh.’ They then trade-off between the melody and lyrics. Every note and word is spoken with tenderness, matching that warm landscape.

While both singers are in different locations, the video cuts them together beautifully. Transition fades smoothly move between Peter and Tim. We even get some split-screen shots to see them both in action.

The song continues with notes high and low. Each singer can match the same level of bass in the original music. The melody is also perfectly preserved to be slow and emotional.

The cover comes to a strong end. Peter brings the lyrics of love lost to its crescendo. With a heartfelt voice, he sings, ‘And so it goes, you’re the only one who knows.’

If you’re curious who these two singers are, they have quite the experience in music. Peter Hollens has a degree in music and loves performing acapella. He’s appeared in some musicals, including ‘Home for the Holidays, Live on Broadway.’

Tim Foust, you may recognize from NBC’s ‘The Sing-Off.’ He would appear on this singing competition show in the acapella group ‘Home Free.’ That group now has a contract with Sony.