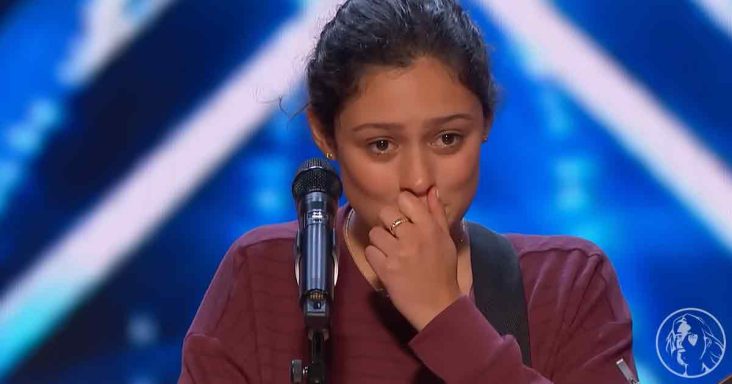 ‘America’s Got Talent’ has its fair share of emotionally-charged auditions. The judges were moved to tears by Amanda Mammana’s audition. Amanda has a speech impediment.

Amanda walks on stage, and Howie asks what her name is. And she takes a long pause and tries to gather herself to say her name. Then, he asks her age and where she’s from, and she says, ‘I’m nineteen, and I’m from Connecticut.’ Amanda takes a long pause before she says this due to her speech impediment.

Howie asks what she’s going to do for them, and Amanda says, ‘As you can tell, I have a speech impediment. Uh, and it caused me to uh, shy away and hide. But I found out that I don’t stutter when I sing.’

Howie says, ‘Oh wow. Is it going to be an original or a song we know?’ Amanda tells the audience that she will be singing a song she wrote. The audience cheers, and Howie says, ‘Good luck!’ Amanda takes a second, and Simon whispers to Sofia, ‘I hope she’s good.’

Amanda starts to sing, and the crowd and judges are blown away. She strums soft chords on the guitar. The song is about her childhood and how she wouldn’t change a thing. At the song’s close, the crowd gives her a standing ovation.

Howie says, ‘Oh my God. Incredible!’ Then, the room calms down, and he asks why she’s emotional. She says, ‘There were times where I never could do something like this. I always thought I’m never good enough.’

A lady in the crowd yells, ‘You are good enough!’ Everyone claps. Simon tells her he loves her personality and thinks she is so brave. He says, ‘I’d love to give you your first YES,’ and the crowd cheers. The judges go down the line, and all of them give her a ‘yes’ as the crowd roars in excitement.