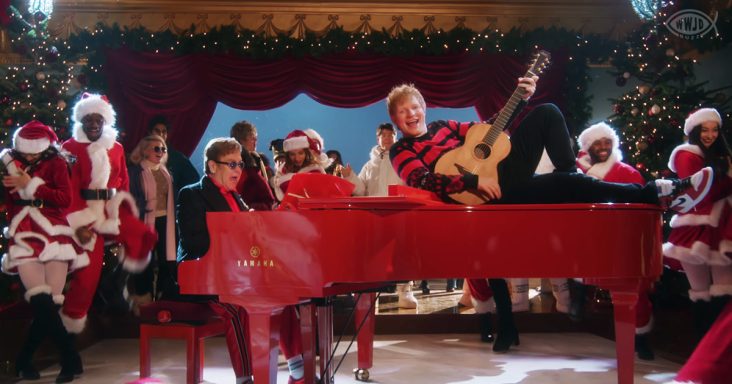 Elton John and Ed Sheeran recently released a new single, ‘Merry Christmas,’ to pay tribute to the Holiday Classics of all time. The singing duo had decided to donate all the profits to the Elton John AIDS Foundation and Ed Sheeran Suffolk Music Foundation.

The song was an upbeat number that the talented singers came up with to celebrate the holiday season. Jason Koenig has directed the pair as they paid tribute to the various Christmas albums.

Elton John and Ed Sheeran were also joined by famous British celebrities, such as Jonathan Ross, Mr. Blobby, The Darkness, Michael McIntyre, and Big Narstie. All the stars did a cameo throughout the song.

The singers re-enacted bits and pieces of different songs from “Last Christmas” by George Michael & the Snowman’s “Walking in the Air” by Peter Auty and many more. Elton John and Ed Sheeran looked very comfortable with each other.

The décor of the background gave a Christmas vibe with several Christmas trees and multiple gifts around it. Sheeran even danced wearing a Santa suit and played in the snow with many others at one point in time.

The British celebrities later sang with the duo. At the same time, Sheeran played the guitar lying on a piano played by Elton John. The pair had decided to release the song next year but changed their mind.

Such a positive and happy song can make anyone forget their sorrows in life. This new Elton John and Ed Sheeran number is an instant Christmas classic that any listener would love to hear again and again.