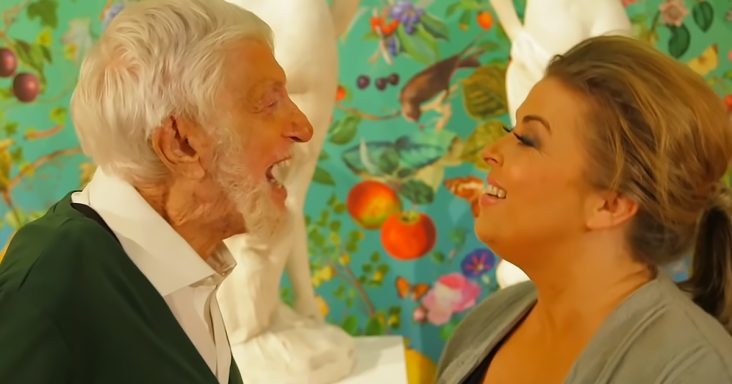 Dick Van Dyke’s career in radio, television, film, and stage has spanned over seven decades. He is an incredible performer and is a triple threat since he can sing, dance, and act.

He’s won Primetime Emmys, a Tony, and a Grammy award. Dick Van Dyke is highly recognizable to all generations due to his starring roles in beloved children’s movies like ‘Mary Poppins’ and ‘Chitty Chitty Bang Bang.’

Van Dyke and his wife Arlene Silver sing and dance together in this video. They perform a cover of Doris Day’s famous song “Everybody Loves a Lover.”

When the camera pans to Van Dyke seated in a floral armchair, the audience may think he’ll just sit and sing. Indeed, that would’ve been enough given that Van Dyke is 96-years-old.

However, Van Dyke stands and joins in the dance with his wife as the men of Vantastix snap and sing the chorus. Then master trumpeter Tony Guerrero enters the room and plays an incredible solo on his horn.

At the end of the video, Silver has Van Dyke include an homage to the opening of the classic Dick Van Dyke show. He almost walks into an ottoman, but he does his side shuffle to avoid it. This is a beautiful video created by two people who love each other very much.