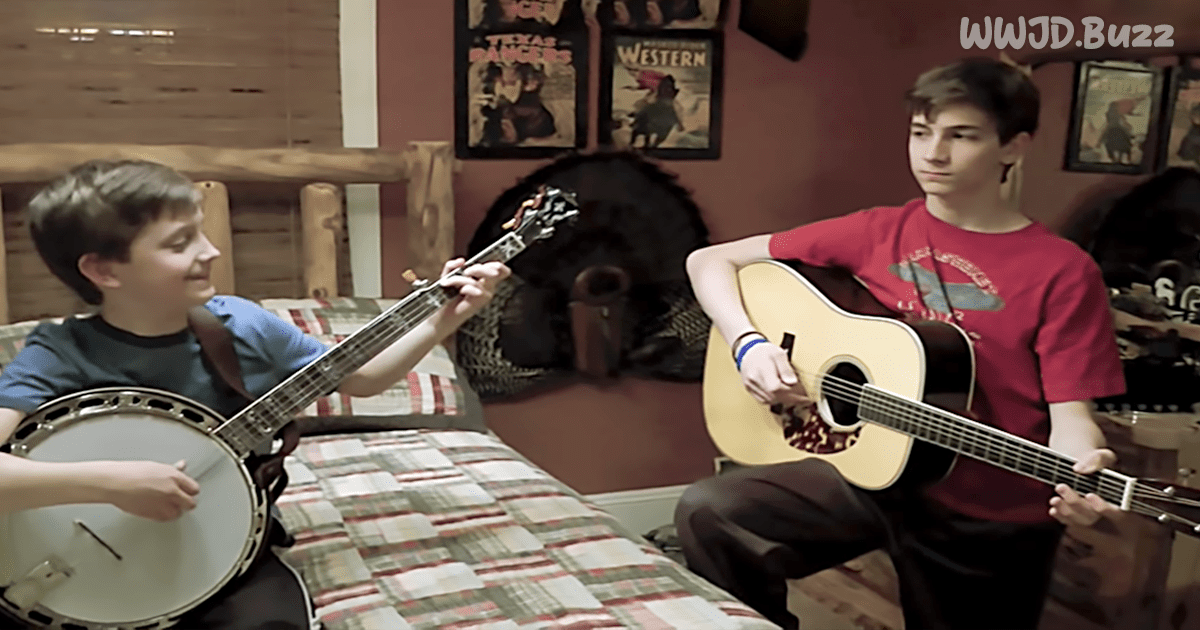 The boys call their group ‘The Sleepy Man Banjo Boys’ or just ‘Sleepy Man’ for short, and while this video was shot at home, don’t be deceived. These boys have been around and then some. They first performed on The David Letterman Show, when their oldest member was just fourteen.

The members of Sleepy Man are Johnny, the banjo player; Robbie, who handles fiddle and vocals; and Tommy, who plays guitar and does background vocals. These are the Mizzone brothers. A fourth member, who is not a sibling, plays bass in the group. His name is Josh Thomas.

The song Dueling Banjos is a staple of Americana music. The song appeared in 1954. It has since become such a part of popular culture that many people can recognize it from the first few notes.

It consists of two banjos talking back and forth, playing duplicate and the complimentary riffs towards each other. Then the song picks up speed and a backing band, becoming a fast and intricate ride that takes listeners back to the rural life that modern Americans have largely forgotten.

Those timeless qualities mean that the song lends itself perfectly to the performance you’re about to see.  From the very start, you can hear the versatility and ability to reinterpret classic material that makes the Mizzone Brothers special. Their tone is tangier than some recordings, which is impressive considering the band recorded in one of their bedrooms.

The Letterman Show appearance was in 2011 and was quite well received. After that big break, the band, made up of the three Mizzone brothers released their debut album America’s Music. This was followed by The Farthest Horizon in 2012, and then a single called Run in 2014.

The members of the group are veterans of the bluegrass festival and benefit circuit. They performed at the Grand Ole Opry in 2011, just a few months after the life-changing Letterman appearance. In 2015, they won twice at the Annual Independent Music Awards.

For this mesmerizing performance, the boys choose to play the duel on a guitar and banjo rather than two banjos which really gives this a gentle country twang if there ever was one. At about the 1:20 mark, the song goes into its fast part, with the brothers taking turns playing solo variations on the iconic opening riff.

Soon after, the fiddle comes in to augment the guitar and banjo. A fiddle is an unusual choice for Dueling Banjos. Traditionally it is played with just two banjos. But the unconventional choice works well for this young group.

The Mizzone boys have a modest, no-frills musical act that simply works. It couldn’t be better even if it was on stage. There is no pretense. Country fans who looking for a fun, energetic listening experience will find it in Sleepy Man.