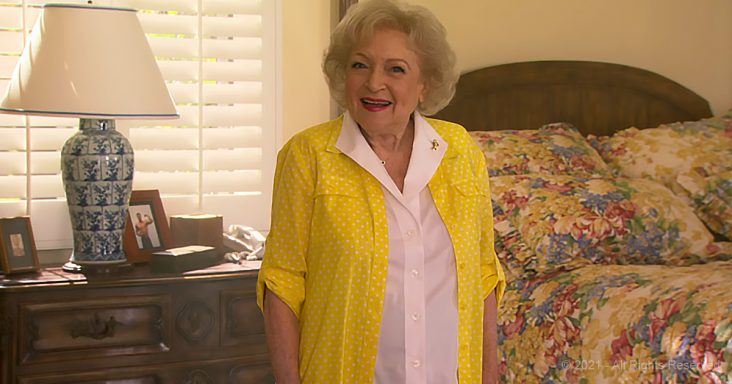 In the style of MTV’s Cribs, Betty White gives a hilarious tour of her house as part of her own comedy segment called “Betty’s Happy Hour.”

“Hi there, I’m Betty White,” she says as she opens the door. “Welcome to my crib.” The first stop on the tour is Betty’s kitchen. More specifically, she wants to show off her fridge. She keeps it stocked with energy drinks and gluten-free mac and cheese, she says. And… some other things.

Next up is her “state-of-the-art” aquarium featuring a single “tropical” fish floating around among coral and other underwater plants. She proudly gazes into the tank at the fish before the scene changes.

In between spoken tour spots, the video features highlights of Betty’s house. Included is a picture of her with her cat, a house plant, and a quick shot of her quaintly decorated living room and dining room.

White brings her well-known classic personality and comedic style to the video, making exaggerated faces, giggling at the right times, and keeping her tone in control. It’s clear she’s having fun bringing viewers on the tour.

“And here’s where the magic happens,” she says as she enters the last room: her bedroom. We’ll leave it to you to watch and find out what she means.