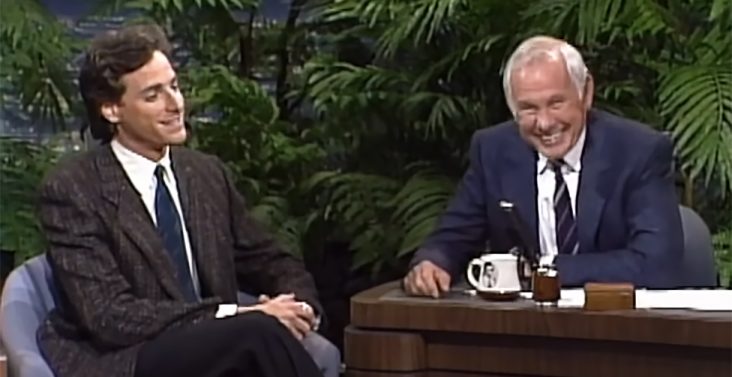 In 1989, Bob Saget appeared on ‘The Tonight Show.’ He charmed Johnny Carson and his audience with funny stories and pictures using his trademark comedic delivery. Bob used his famous relaxed tone and fatherly persona to endear himself to Johnny while getting in a few gags!

This clip will remind us why we loved Bob’s comedy and personality. We welcomed him into our homes as the Father on Full House, and over the years, he made us feel like we knew him personally.

Bob starts by entertaining Johnny with baby pictures of the great Carson he claims to have found at an old artifact store. He shows Johnny his baby picture and waits for Johnny’s validation. Bob moves on to Johnny’s sidekick Ed McMahon, whose baby picture comedically shows a toddler holding a beer bottle!

Then, he hits Johnny’s band leader, Doc Severinson, showing a baby holding a miniature trumpet. The entire scene has the host and audience laughing! Bob even tries to pretend to offer Johnny the pictures for $40 each with frames, and Johnny considers the purchase!

Bob recounts a story of an exterminator he hired to rid himself of some rodents. He describes the hilarious encounter many homeowners can relate to in his typical fatherly tone.

He finishes his segment by telling Johnny that his parents are currently visiting him. Bob tells Johnny they are in the audience wearing matching outfits. Bob even makes a few jokes about how he can’t wait to get rid of them, and the audience roars with laughter.

While we all know Bob’s work on the television show Full House, it is fun to see another side of him during this interview. His delivery and comedic timing are on full display at the height of his career.