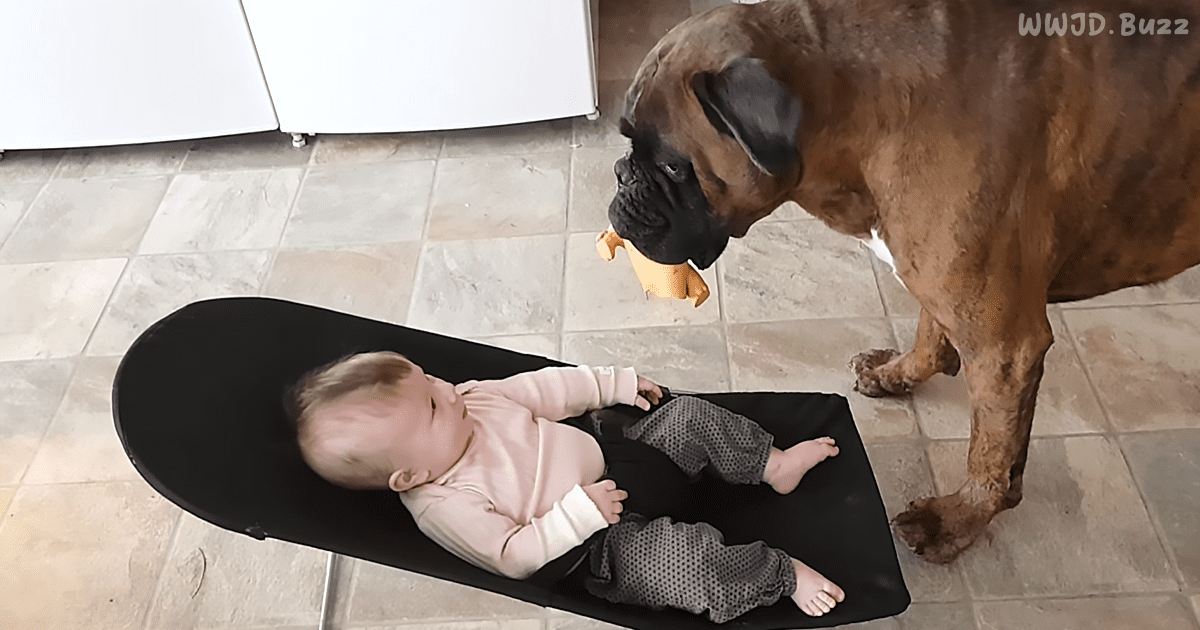 Do you ever feel you need a babysitter and just cannot find one? This seems to be almost everyone’s problem. And if you don’t have a few phone numbers handy, then you’ll not be getting anywhere. I had that happen to me once and I ended up staying at home because you are not just going to hire anyone, right? How about considering a dog ‘babysitter’?

I know what you’re probably thinking, they can’t. Well, they may not be certified yet, but I have seen a few cases where dogs manage to do very good work. The fact that dogs tend to be very careful with children, especially the ones from their own home is known to everyone. They are not only good at protecting them, but they are also good at entertaining them.

One of these entertainers is a dog named Prince. He is a beloved member of a family who happens to have a baby. The reason they love him so much is that he is always up to some antic which usually ends up making everyone laugh. He is the family’s boxer who loves to do what many dogs do but is part-comedian as well. He loves putting on a “shows” for the family.

In the following video, he is watching over the family’s 5-month-old baby girl. He seems to be as proud of her as the other members of the family are. He then surprises everyone with his funny moves and antics. He is playing with one of those chew toys. Who knew they could be so fun to play with!

The family says that Prince has always been like this. They got him when he was just a 2-month-old puppy. It was a gift from a family they have known for years. From the time he was very little, he would show signs that he was very close to the family. They would leave to run errands and he would stay home to ‘guard’ it. Then, when they came back, they would find him waiting for him at the door.

As he grew up, he became even more attached to them and when the baby was born, it was even better. The dog felt that he was the official ‘protector’ of the family, and now, the baby was included in the bundle. There was even one time that the baby started crying, and Prince went quickly to the rescue. He went running to the baby’s side and stayed there trying to make her laugh.

This time, the family knew something fun might happen. So, they pulled out a cell phone to record this interaction that ended up going viral. Check it out!